For years, workplaces have worked to create safe and friendly workplaces for their LGBTQ — lesbian, gay, bisexual, transgender or queer, and now LGBTQIA with the addition of intersex and asexual — team members. But with the increasing number of people entering the workforce who do not identify as either male or female, identify as both, or reject gender labels entirely, organizations are in search of guidance and/or advice. The individuals refer to themselves as gender fluid, gender neutral, gender queer or gender nonconforming.

Advocates expect that percentage to increase as younger generations who are more open about gender identity enter the workforce. A Pew Research report from 2018 supports that expectation in its findings that in Generation Z, 35% of those between the ages of 13 and 21 said they know someone who identifies with gender-neutral pronouns.

What is a pronoun?

A pronoun is a word that refers to either the people talking (like “I” or “you”) or someone or something that is being talked about (like “she,” “it,” “them,” and “this”).

Gender pronouns (such as “he/him/his” and “she/her/hers”) refer to people that you are talking about.

Gender pronouns are the way that we refer to each other’s gender identity – though we often don’t think about them. It’s a habit that’s so ingrained, we don’t even realize we’re doing it. Most of us are used to looking at someone, categorizing them into “he” or “she” by some unconscious instinct, and then starting to talk about them that way.

But a person’s name, their clothing, or any other outward signals don’t necessarily tell you how that person identifies. That goes not just for transgender folks, but those of any gender identity. And being misgendered (referred to in a way that assumes a gender other than the one the person identifies as) can be hurtful, not to mention disrespectful. Some people may prefer a gender-neutral pronoun such as “they” (e.g. “I know Sam. They work in the mail room.”)

Nothing is more personal than the way in which people refer to us through our name and pronouns. Using a person’s chosen name and desired pronouns is a form of mutual respect and more than common courtesy; it’s their civil right. Federal law on the subject arises out of agency and court interpretations of Title VII of the Civil Rights Act of 1964, which expressly prohibits workplace discrimination based on race, color, religion, sex and national origin. The Equal Employment Opportunity Commission (EEOC) believes Title VII’s prohibition against sex discrimination also bans any employment discrimination based on gender identity or sexual orientation.  Those prohibited acts include “intentionally and persistently failing to use the name and gender pronoun that correspond to the gender identity with which the employee identifies, and which the employee has communicated to management and employees.” Both managers and co-workers should use the individual’s chosen name and pronoun “in employee records and in communications with and about the employee.”

Not sure which pronoun a person uses?

Listen to the pronoun other people use when referring to them. Someone who knows the person well will probably use the correct pronoun. If you must ask which pronoun the person uses, start with your own. For example, “Hi, I’m Alex and I use the pronouns he and him. What are your gender pronouns?” If you start the conversation with yourself, you’re not putting someone on the spot. Then, use that person’s pronoun and encourage others to do so.

Here are some examples of opportunities to ask for or offer pronouns:

When someone shares their pronouns with you, some appropriate responses include:

What if you make a mistake?

It’s okay to make mistakes. If you accidentally use the wrong pronoun, apologize quickly and sincerely, then move on. The bigger deal you make out of the situation, the more uncomfortable it is for everyone. 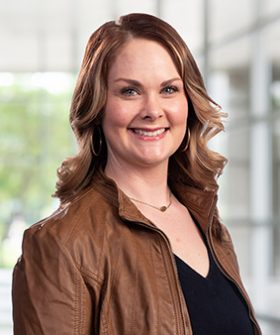 When Cori was in college studying psychology, she took a course called “Psychology at Work.” She enjoyed the course so much, she decided that a career in human resources is what she wanted to pursue. As a key member of the People First team, Cori is responsible for leading strategy, design and delivery of broad-based learning and […]